Hey guys I was wondering when y’all are planning to update documentation on many of the amazing features you have. For example I think it’d be super helpful to have a further in depth guide for A Rails/Sidekiq/Redis stack because of how often it’s used. I know that you have something like this already, but at the end, it just says “Go to redis guide” and " Multi-Process Apps guide", good luck.

I cannot find anything of this sort in the docs, it’s so cool though!

Anyways, I really want you guys to succeed, what you have is really great! However in my opinion, as a newcomer, it’s really intimidating to get things going and customized after you hit fly launch. Maybe it’s just me though.

Anyways, let me know if there’s any way I can help in this process, and when we can expect some docs with your new awesome features that really should be highlighted and not easter egged in the forum haha!

Thanks for the amazing platform

Thanks for raising this!

The short answer - we’re developing a whole new runtime and orchestration layer to replace some of the undocumented features. The new ones will work better and probably have a different interface.

That said, it sounds like the current version of the multi-process feature is known-enough to be worth documenting. Especially because we’ve led you astray - these processes do not run in in the same VM. They run as separate ‘process groups’, each in its own VM with the same contents but different commands.

Besides this feature, what else did you find missing from docs?

Also, FYI, our docs repo is open for PRs, if you feel adventurous!

Thanks so much for repsonding!

Okay that makes a lot of sense when it comes to process groups. I think it’d be really insightful if there was a bit more visual separation than just filters on the metrics and the scaling. For example I think it might be a bit more clear visually if you separated the scaling part 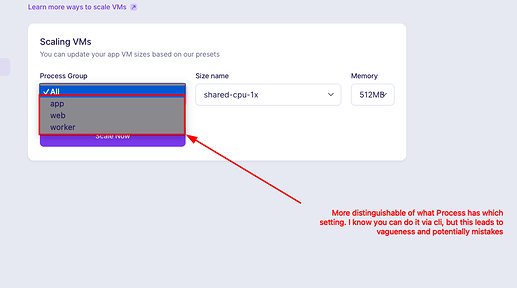 To be clear my confidence in self-hosting a database is super low, so I’d rather have a managed database solution that I can call in and replicate on fly instead of having to handle me messing up my database somehow on here. Hence me requesting these things. I’m fine with downing my server every once and a while but I’m not fine with losing data (obviously haha)

Alright, that’s all I can think of for now

I’d contribute but I don’t feel like I know enough, one day when I become a DevOps pro I can pitch in but I’m not even confident in how I do things now.

Echoing OP’s sentiments: Machines is one of the most elegant API for “serverless” out there (tall order given GCP Cloud Run and Cloudflare Workers are no slouches)! If more stuff like Machines is forthcoming, then the wait would be all the more worth it.

I am also eager to see more documentation. As a hobbyist, it’s intimidating to hand over payment information to a service lacking robust, detailed walkthroughs. You don’t know if you’re going to get halfway through a deploy only to be told to draw the rest of the owl.

I successfully migrated my tiny site off a VPS, but a few hours into deployment I almost quit fly entirely because I wasn’t confident I could launch without official guidance.

Do you mind sharing how you got Rails Redis and Sidekiq running together.? I’ve tried to use multiple processes as you showed but I can never get the worker to come up. It always dies as unhealty.

I created a separate Redis server but I need to get Sidekiq working.

I didn’t have this kind of trouble on Render and I so agree with you on the docs here.

Thanks in advance for any help.

Okay so be sure that the redis internal url was Set on the main secret.

This was the toml for the redis

This is the toml for the main instance

Of course change the app name. Hope this helps! If you have errors and can’t solve it, post it here and I might be able to help.

Thanks! That is almost exactly what I had but somehow mine worker always came up unhealthy, this morning it didn’t. Yeah! I just need to get my regions set and I should be ok.