You can schedule a machine with flyctl or via curl like so:

We currently only support the following for schedule, "monthly", "weekly", "daily", "hourly". This is calculated from the time of machine creation, so the machine will not start at a specific time i.e. on the hour, every wednesday etc

A scheduled machine can be monitored via the UI and the by running fly machine status. Do note, that a schedule machine when created will start in a stopped state and move to a started state at every scheduled interval. 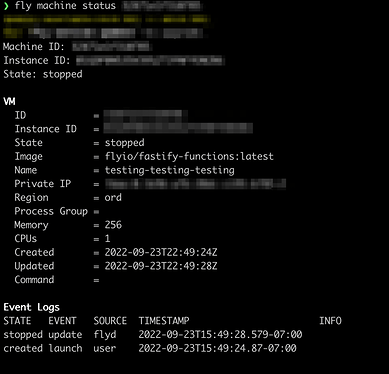 This feature is available on all hosts, and we’d love to hear your feedback and see what you build!

I’d like to try this out! I’ve got a deployed machine (currently stopped, I can start it manually) whose status I can interrogate using fly machine status [machine id]. However when I run fly machine run —schedule=daily [image from status command] I get an auth error:
Error Authentication required to access image "docker.io/library/[name:deployment...]". What am I doing wrong? I should add that I’m using an image built using a local Dockerfile.

What am I doing wrong? I should add that I’m using an image built using a local Dockerfile.

If I understand the problem right: You’d need to push that img to Fly registry because Fly can’t deploy from private docker repositories.

Multiple ways to do so: Fly deploy permission denied connecting to Docker daemon - #2 by ignoramous

Ahh, yep the second option worked – looks like I’ve got a new machine using the pushed image, and the --schedule switch was accepted, so I’ll find out if it runs sometime tomorrow.

So what’s the best approach to deploying updated images? It seems like you can’t / aren’t supposed to update machines with new images – just stopping it if necessary and removing it and creating a new one is preferred? How does that integrate with e.g. Github actions? If I understand correctly, I’d want to:

The best practice is to use the GraphQL APIs which are more mature (even if as inconsistent) over flyctl m commands.

I prefer flyctl and I have requested that Fly engs pls:

It’d also be neat if flyctl m run <img> --name <existing-machine-name> --config </path/to/machines.toml> could deploy to an existing machine. But it doesn’t.

You could destroy machines and create new ones, if that’s what you prefer, or flyctl deploy --image <img> --now --strategy immediate --config </path/to/machines.toml> to deploy the img to all machine VMs of the app (as defined in machines.toml).

That all seems very sensible. I haven’t seen any reference to machines.toml in the docs – is there anything I can have a look at?

It is just your regular fly.toml but within limits (as Machines don’t yet support all configurations options that a regular App does). While flyctl m commands have limitations of their own, as it’s pretty raw and new.

I may have confused matters yesterday (or maybe some changes happened at the backend)? In any case: when a new app image is deployed using flyctl deploy --remote-only, that new image is assigned to any running machines, but their env and schedule entries are wiped.

You should be able to repro this by running fly m status [id] -d before and after a deploy. The image assigned to the machines is the same as you see if you run fly image show. Creating a new machine with fly machine run --env=… --schedule=… registry.fly.io/[image_id] --region=… shows the expected env and schedule entries when running fly m status [id] -d, and I can confirm that the scheduler is working.

I may have confused matters yesterday (or maybe some changes happened at the backend)?

It is totally possible that flyctl deploy wipes off schedule; I haven’t see if wipe off envs though (I set them in the dockerfile with the ENV directive and in the [env] section of the .toml file and these have been re-applied across deploys and runs, just fine): Bug : During Development of Machine Manager - #9 by tvdfly

For scheduled machines, it could very well be that only flyctl m run is supported. And so you were right: One would have to remove the existing machine and run a new one just to update the docker-image (iff using flyctl), since flyctl m update is broken.

I set them in the dockerfile with the ENV directive and in the [env] section of the .toml

I hadn’t set them in machines.toml or Dockerfile – I’ll try that.

For scheduled machines, it could very well be that only flyctl m run is supported. And so you were right: One would have to remove the existing machine and run a new one just to update the docker-image (iff using flyctl ), since flyctl m update is broken.

Gotcha. In practice this isn’t a big deal for my use case atm as everything is working now, so updates to the image will be hopefully rare, and I assume flyctl m will catch up at some point.

I assume flyctl m will catch up at some point.

I wouldn’t hold my breath…

If I was doing it, I’d schedule Machines from an external source like Scheduled Durable Objects or GitHub Actions.

If this PR is merged flyctl m update <machine-id> --image <new-image> -a <machine-app> ... should carry forward the existing schedule unless overriden with the --schedule switch (which, per my reading of the code, flyctl m update already supports).

so updates to the image will be hopefully rare

So, the PR (linked above) was merged (and hopefully, isn’t reverted before the next release).

This command should build and deploy a new image with schedule intact:

I’ll send another PR to fix fly deploy wiping out schedule, in a bit.

Thank you for this feature. I’m currently migrating a few Heroku apps to fly that require this. Can you provide an example on how to run a single Rake task with a schedule machine? I’m not sure I totally understand how to set it up.

The documentation for machines in general is VERY confusing. I managed to get a simple nodeJS machine setup by doing the following:

I haven’t tested this yet, but I assume you can delete the machines app and create a new one, this time with the --schedule=hourly argument EDIT: or use the fly machines update command

You can condense these into one step:

Then clone these machines if we want more of them:

Would it be possible to update the documentation at Machines · Fly Docs or add a new document for this kind of stuff, especially with some basic examples (both docker & non-docker)? I had to look at multiple forum posts and the above documentation to get even a basic machine working.

I had to look at multiple forum posts and the above documentation to get even a basic machine working.

One can sure send a pull request to improve the docs: https://github.dev/superfly/docs/blob/main/reference/machines.html.md.erb

Is there a way I can view my machine’s schedule status? I updated an existing machine to be scheduled hourly, but I can’t see anything in the dashboard to suggest that it will actually execute hourly, and is in state “stopped”. Logs are cleared each time I re-visit the monitor page, so I don’t know how to view it except keeping the monitor page open for an hour. I am supposed to start the machine again after setting a schedule?

If you run fly m status [machine id] -d you should see JSON output under the Config: heading. That output should include a schedule key showing the currently configured schedule, e.g. daily.