Show & tell: what are you running on Fly.io?

I thought I would start a thread for people to share what apps they’re running on Fly.

If you have a public app running on Fly, reply with the URL and and bit about your stack!

To get things rolling: at the moment, my only public Fly app is my blog, The Autodidacts, which consists of an app instance running Ghost & a database instance running MySQL 8. Both are shared-cpu-1x VMs with 256MB memory.

I’m in process of migrating several other sites to Fly.

We run some 44+ Machines across 28 regions (jnb didn’t work for us and vin was removed from underneath us) that powers a content-blocking DNS resolver written in JavaScript (running NodeJS): GitHub - serverless-dns/serverless-dns: The RethinkDNS resolver that deploys to Cloudflare Workers, Deno Deploy, and Fly.io

We ran a TLS proxy (written in Go) for anti-censorship purposes, but tore it down for the time being, as the costs were mounting beyond our control: GitHub - celzero/midway: A rudimentary middleware for port 80 and port 443 over tcp

I’ll bring it back up once I can figure out how to fund the effort. GitHub Sponsors and the donate buttons haven’t moved the needle an inch.

Running a Next.js application on Fly containers at the moment (Use it as my frontend, and as my API). And we’re running globally, which is awesome too!

I’d like to play around with getting Temporal workers deployed to Fly as well, hopefully soon. Temporal has a Cloud service they’re launching soon (Temporal Cloud), which i’m hoping to use in conjunction with Fly VM’s to process my tasks/jobs (basically a task queue system).

Running a few open-source and custom apps on Fly. Data is hosted elsewhere. Here’s a write-up on my deployment! 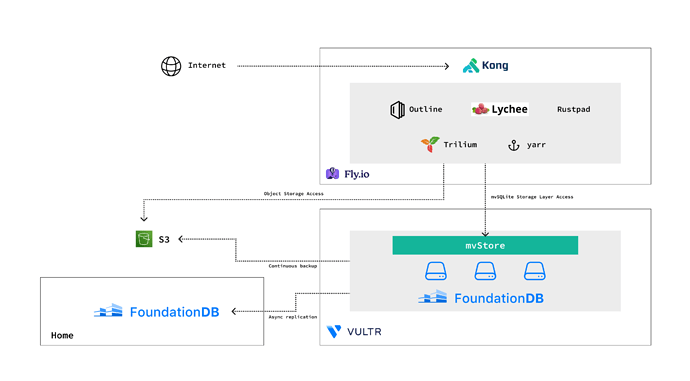 Our MyMahi platform is powered mostly by fly.io (for frontend servers, API servers, and DB servers) with some components from AWS (mainly S3, waiting on fly.io to provide a competing service

). We run nginx for our frontend which proxies to S3, nodejs for our backend, and CockroachDB for our database.

We also host a simple ip to country service, ip-info.fly.dev which is open but currently only used by us. It can be queried using https://ip-info.fly.dev/?ip=<ip_address> and supports both ipv4 and ipv6.