Old VM not getting terminated

I have a small app running on Fly, and since yesterday, for some reason, a specific old deployment is stuck (and is serving requests instead of new deployments) no matter how many new versions I deploy. You can see v30 is still running, despite multiple versions having been deployed after that. 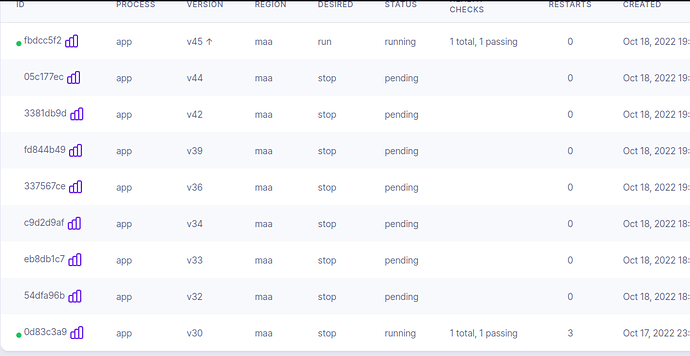 I tried manually killing the VM, as well as scaling down to 0 and back up to 1, but nothing seems to work.

Any idea why this is happening? This seems to be the same issue as: Old VM not stopping while deploying . (also looks to be same region), though I’m unsure if it’s the same issue.

Sorry about that. We just fixed the issue. One of our hosts in MAA got out of sync which prevented VMs from starting.

Perfect, the issue is resolved now… Thanks michael!