Im using the most recent template from flyctl for laravel and I noticed that my cronjobs that require connection to the database are missing the env variables.

Tried to ssh into the cron vm and clear config cache because maybe it was from it but it did not work.

What worked was to put on the entrypoint.sh the config:cache line inside the “if [ $# -gt 0 ];then”.

I don’t know if there is a better way or if the default template is missing something to have the env variables inside the cronjob that’s why I decided to leave a message.

Can you can share your Dockerfile? I saw that issue before but thought it was resolved - but perhaps not!

Edit: i see you said the latest actually, gotcha. I’ll see if I can replicate that.

How did you notice that? Did you create an app process for cron specifically and check the logs?

I prepared a little demo so that you can replicate the issue, maybe its easier for you to test it out and iterate over it. 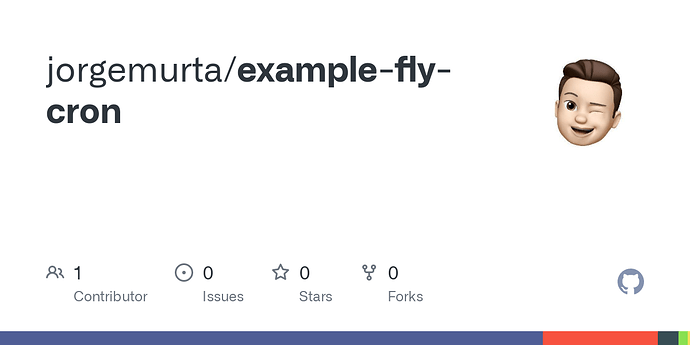 Contribute to jorgemurta/example-fly-cron development by creating an account on GitHub.

On the commits I broke it down into 3:

To test then the output of the command I just did “fly console ssh” (into the cron vm) and did “tail -f /var/www/html/cron.log” and the default value of “env(‘APP_KEY’, ‘Cannot read APP_KEY’)” got printed.

I hope this is of any help

Thanks, I’ll check it out! Hopefully our timezone difference doesn’t make this too grim

Don’t worry, Im trying some things on my side too, but there is no business critical problem for me since I have this workaround with config:cache on entrypoint.

The goal is that we maybe can improve the flyctl default template for the next one.

Again thank you so much for the help!

If you have the setup in front of you, can you test that? You can have your scheduled command echo out an environment variables that laravel’s config wouldn’t read in and save anything, like env('FLY_REGION')

Yeah exactly, with that example of env() not even the config:cache works. It just did in my case because i was missing the database env variables that are used in laravel config. Therefore caching them did the trick for me.

Do you have an idea how we can solve this issue so that the process in cron -f can read env variables?

Okay - I looked into this a bit.

Running cron -f is intentionally ignoring env vars - that’s a function of the cron daemon (not part of the Docker / Fly VM config).

There isn’t really a great solution:

So, a few options on how to proceed:

(I like option 2 the best I think, but getting values into Laravel and doing the config:cache thing might be the nicest in terms of being consistent - depending on your needs).