I would like to know if there is a specific command for rails db:migrate:reset.

Happy new year.
Thank you for your continued support this year.

Hi!
I would like to ask you a question.

What I want to achieve =
I was able to successfully deploy the rails application the other day, but I would like to know if the database can be reset once.
In other words, could you tell me if there is a specific command for rails db:migrate:reset, rails db:migrate, rails db:seed?

Current status =
I looked at the community question (rails) but can’t find it.
The other day, Mr. RUBYS taught me and received the following answer.
↓
May I ask you one last question?
You normally generate users and products with rails db:seed , right?

The app also had a seed file that generated users and products by default.

But when I look at what I have deployed, neither users nor products are generated.

As a result, I was able to achieve what I wanted to do, but is there a specific command that corresponds to rails db:migrate:reset and rails db:migrate related to the database?

What I have tried =
I googled. I read the community question. I’ve read through the documentation. But it didn’t turn out.

my development environment =
M1 mac, rails, ruby, once successfully deployed with fly.io. I am using it for free. I have two apps deployed.

Could you please lend me your wisdom?
Thank you very much.

What I have tried =
I googled it.
Apparently I. It seems that the knowledge of postgres and database is not enough. I’ve also read the postgress docs on fly.io, could you give me some direction hints?

// abbreviation
ActiveRecord::ProtectedEnvironmentError: You are attempting to run a destructive action against your ‘production’ database.
If you are sure you want to continue, run the same command with the environment variable:

It seems that it is intentionally played so as not to reset the production environment by mistake, but it is a problem when testing.

Method
Type the command below.

For confirmation, you will be asked to re-enter the application name, so if you enter it, the DB will be reset.

After that, store the migration and the initial value.

I don’t think it will work this way, but could you give me a hint?

The application I have deployed is for personal use and I don’t really care if the database is reset.

There is nothing worth rails db:migrate:reset, and when I want to start over, do I have to redeploy in a different form?

You can make your own. Any file matching lib/tasks/*.rake can define new rake tasks. You can modify lib/tasks/fly.rake or create your own file.

For example, if you add the following to `lib/tasks/fly.rake’:

… you will be able to invoke it via:

thank you
I tried it but got the following error.

Don’t know how to build task ‘db:mgirate:reset’ (See the list of available tasks with rails --tasks)
Did you mean? db:migrate:reset

Sorry, there is a typo in that. I meant db:migrate:reset.

I thought so too.
Thank you for noticing.

Thank you!
I will recommend this to my acquaintance of Japanese engineers!
fly.io, the fastest and coolest alternative to heroku.
If anything else comes up, I’ll look into it myself, but please let me know.
Thank you very much.

thank you for your hard work.
I thought the previous issue was resolved,
I got an error as below.
↓

I was told before
fly ssh console -C "/app/bin/rails db:seed”

I tried to modify the rake file instead of and see if it could be deployed.
However, at the end of the day, I got an error and tried again.

To me it looks like your database already exists, migrations have been run, and the seed data has already been loaded.

Perhaps what you are looking for instead is:

thank you.
I have just returned.
I got an error.

I found the following article and hypothesized that it might be similar to this.

overview
From Rails5, in production mode, a function has been added to prevent the execution of commands that destroy the DB, such as db:drop.
Below is the procedure for rake db:drop on production.

Set environment of ar_internal_metadata table to production
First of all, how to deal with errors that occur when you dump a DB in a different environment such as development or staging and put it in the production DB.
If you only want to know how to rake db:drop in production, go to the next section.

If it is not in production, you will get an error like this

$ RAILS_ENV=production bundle exec rake db: drop
rake aborted!
ActiveRecord::EnvironmentMismatchError: You are attempting to modify a database that was last run in staging environment.
If you are sure you want to continue, first set the environment using:

cause
This error occurs when the environment set in the ar_internal_metadata table does not match the one specified in the command you are trying to execute.
This happens when you dump a DB in a different environment such as development or staging and put it in the production DB.

$ bundle exec rails db:environment:set RAILS_ENV=production
An error occurs when executing db destruction processing in production
I get an error like this

$ RAILS_ENV=production bundle exec rake db: drop
rake aborted!
ActiveRecord::ProtectedEnvironmentError: You are attempting to run a destructive action against your ‘production’ database.
If you are sure you want to continue, run the same command with the environment variable:
DISABLE_DATABASE_ENVIRONMENT_CHECK=1
cause
reference
If you want to intentionally destroy the DB in the production environment, as shown in the error message,
It is OK if you specify the environment variable DISABLE_DATABASE_ENVIRONMENT_CHECK=1.
The tasks targeted for prevention processing are as follows.

Rails5 seems to have added a function to prevent commands that destroy the DB.

approach
As per the reference article, in the environment variable
DISABLE_DATABASE_ENVIRONMENT_CHECK=1
can be added, so you can drop it with the following command.

the environment variable
DISABLE_DATABASE_ENVIRONMENT_CHECK=1
can be added

You can put that in your rakefile: 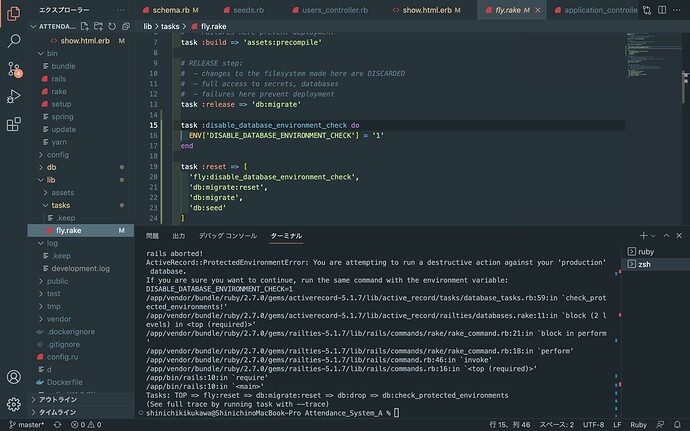 The following commands in the previous article have not been typed.

Hello!
Since then, I’ve researched and tried many things, but the problem persists.

I’ll sort things out for now.
What I want to achieve =
I don’t have another user right now, so I want to reset the db once.
I want the command corresponding to rails:db:migrate:reset to work.

Current situation =
Let me know and I did the following:
↓

the environment variable
DISABLE_DATABASE_ENVIRONMENT_CHECK=1
can be added

You can put that in your rakefile:

result =
I got an error. (As screenshots from the previous thread)

What I tried after that =
Deploy another application, and also with the environment settings you taught me,

but it didn’t work. I got an error.
(Another error has occurred. I will attach a separate screenshot.)

What I have tried on it =
It said that the user had access and couldn’t, so I logged out and cleared the chrome session.
Still not good.

Could you give me some hints? 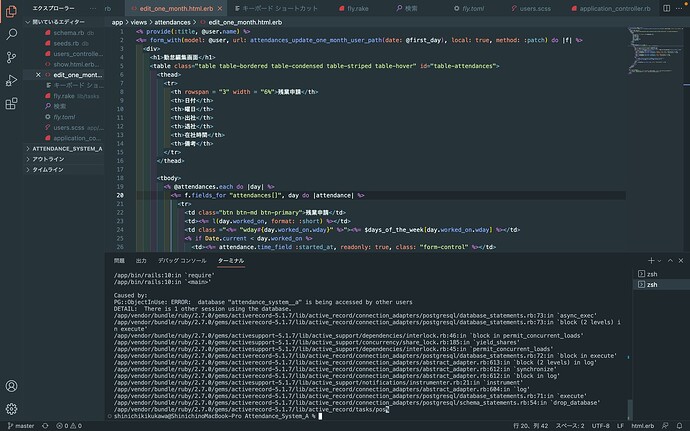 I used the following article as a reference.
↓

From Rails 5, there is a mechanism to prevent the execution of DB destruction tasks in the production environment.

For example, when I try to run db:drop in my production environment, I get the following error (ActiveRecord::ProtectedEnvironmentError).

$ RAILS_ENV=production ./bin/rails db:drop
rails aborted!
ActiveRecord::ProtectedEnvironmentError: You are attempting to run a destructive action against your ‘production’ database
If you are sure you want to continue, run the same command with the environment variable
DISABLE_DATABASE_ENVIRONMENT_CHECK=1
As you can see, this is a mechanism to prevent accidentally destroying the DB in the production environment (By the way, according to the PR comment, I actually accidentally destroyed the DB on Heroku and would like to ask for recovery. It seems that the request was allotted).

If you want to intentionally destroy the DB in the production environment, just specify the environment variable DISABLE_DATABASE_ENVIRONMENT_CHECK=1 as shown in the error message.

The tasks targeted for prevention processing are as follows.

#config/application.rb
ActiveRecord::Base.protected_environments = %w(production staging)
$ RAILS_ENV=staging ./bin/rails db:drop
rails aborted!
ActiveRecord::ProtectedEnvironmentError: You are attempting to run a destructive action against your ‘staging’ database
If you are sure you want to continue, run the same command with the environment variable
DISABLE_DATABASE_ENVIRONMENT_CHECK=1
You can specify an Array for ActiveRecord::Base.protected_environments, so of course it is possible to target multiple environments to be protected (the value will be overwritten, so if you want to specify the environment in addition to production, use production must be specified explicitly).

By the way, the check of environments is done by comparing with the environment where migration processing etc. were performed at the end.

What this means is that from Rails 5, when db:migrate or schema load processing is performed, the information of the environment that performed the processing is stored in the DB.

Specifically, a table named ar_internal_metadata (in the default case) is created inside Rails and environment information is stored there.

Therefore, if you try to execute a destructive task such as db:drop in a state without ar_internal_metadata (when updating from Rails 4 to Rails 5 and db:migrate has never been executed), Environment information An error (ActiveRecord::NoEnvironmentInSchemaError) will occur.

Environment data not found in the schema. To resolve this issue, run:

This happens regardless of whether the environment is protected or not.

To resolve it, run db:environment:set task as shown in the error message (running db:migrate is also OK).

By the way, if for some reason the environment in the ar_internal_metadata table contains a different value than the environment you are trying to process, this will also result in an error (ActiveRecord::EnvironmentMismatchError).

For example, let’s say that the environment in the ar_internal_metadata table in the development environment contains the value test.

$ ./bin/rails db:drop
rails aborted!
ActiveRecord::EnvironmentMismatchError: You are attempting to modify a database that was last run in test environment.
You are running in development environment. If you are sure you want to continue, first set the environment using:

In this case as well, it is OK if you execute db:environment:set task as shown in the error message.

If you use the same DB in different environments, I feel like it’s going to cause a lot of trouble.

Miscellaneous impressions
I think it’s a very good thing that the DB destruction task prevention process that was included in Rails 5 is now provided by default. This is a complete digression, but I made a gem to do something similar, but it is no longer needed. No, it’s a good thing.

And I feel that ActiveRecord::EnvironmentMismatchError will occur from time to time…

I used the following article as a reference.
↓
I kept it as a draft as a memo for myself, so I will publish it.
(In short, the intention is to publish it as a memorandum and look back later when you are in trouble)

It may be common sense, but it was my first experience, so I will make a note of it.

In the Rails “Production environment” used as a test environment,
“rails db:drop” failed.

This is to avoid accidentally corrupting the DB in a production environment,
Prevention measures prepared by Rails.

So how do you do “rails db:drop”
The article below was helpful.