RAILS_MASTER_KEY environment variable not getting fetched

When trying to run fly deploy It is giving a error of rails encryption key is missing.

But I already have the secrets added to the app and it is mentioned below.

Can anyone please do let me know why dockerfile is not picking the secrets. 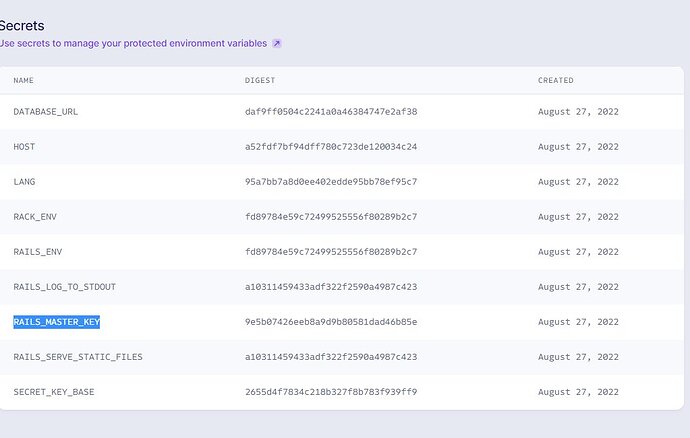 Or, this for another: Secret docker build arguments - #5 by jsierles

@vigneshacker I had a problem where I tried to deploy an existing app to Fly.io. Upon first deployment, Fly creates a new RAILS_MASTER_KEY but this key is unable to decrypt anything, since my secrets were encrypted with an previously set key.

To manually set the one I previously set in my project, I had to run:

If that doesn’t do it, could you share logs?

Verify that your credentials are encoded using your current `config/master.key’ using:

You can see what RAILS_MASTER_KEY is deployed using:

If this doesn’t match the value in config/master.key, run:

I have created an custom build-arg and added an

Then, during the deploy. Went with below code

Careful using --build-arg for sensitive data though, --build-secret exists for a reason (which Fly does support too).

Worth mentioning that you almost definitely don’t need the real value available at build time. For rails docker builds, I typically just set this to a placeholder value to make rails happy, and then set it to a real value at runtime, via fly secrets set.